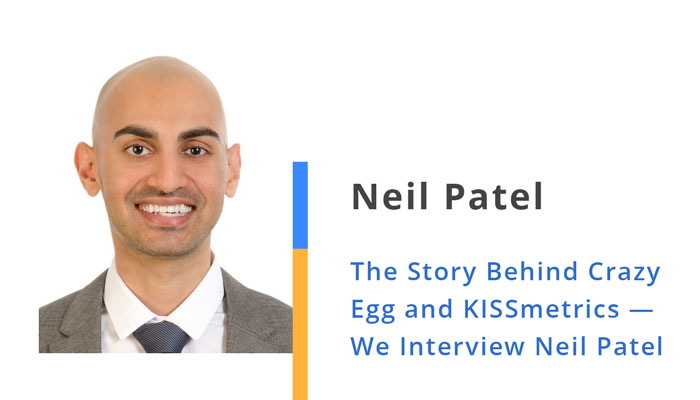 Everyone in the digital marketing sphere has heard of Neil Patel. He is the founder of Quick Sprout and the co-founder of three more essentials tools — Crazy Egg, KISSmetrics, and Hello Bar. He also writes constantly on the subject of web analytics to share his knowledge with a wider audience. Born in London, Patel grew up in California surrounded by a family of hard-working entrepreneurs and was inspired by their work ethic. Today, he is ranked in the top 10 of online marketers, according to Forbes, and has worked with businesses such as Amazon, HP, Viacom, and GP. With so much experience and expertise, we could not pass up the opportunity to talk to this star.

Q: First things first: Why did you decide to become involved in digital marketing?

A: Easy — I wanted to get rich! Although I had experimented in a few ventures before, it wasn’t until the age of 15 that I began to dabble with technology. The inspiration came from my sister, who was working at a local Oracle consultancy. Her boss was charging companies between $125 and $150 per hour. To me, this was riches! I wanted to do the same, so I set up an online job board called Advice Monkey, built around the principles of Monster.com.

Unfortunately, this venture turned out to be less successful than I was hoping. The site cost $5,000 just to set up, and I soon realized that it wasn’t enough to drive traffic. So, I hired an Internet marketing firm. They were no help. After trying two more firms, also to no avail, I decided to take matters into my own hands and learn digital marketing myself.

I quickly learned that, even though I was now able to gain numerous visits, the whole setup of Advice Monkey was wrong for generating profit. The experience also taught me another important lesson: there is no use creating a business unless it is something you are passionate about.

Q: Where did you go after Advice Monkey?

A: My next step was to increase my education! I enrolled at Cypress Community College while still at high school with the intent of finishing my degree in two and a half years. It actually took a bit longer than that, and I graduated from CSU Fullerton in 2007 with a BA in marketing.

But, even before I graduated, I satisfied my entrepreneurial spirit by experimenting in Internet marketing. I teamed up with my sister’s then-boyfriend (now husband) and we offered our services to various companies. We invested our earnings in a few ventures, but most of these resulted in losses. Taking our remaining profits, we created our own company — Crazy Egg.

Q: Was Crazy Egg a success from the start?

A: Not really! For one thing, I didn’t have enough time to dedicate to Crazy Egg in the beginning. Remember, I was still at school full time, plus I was traveling almost every week to speak at conferences and was working more than 60 hours a week at our Internet marketing agency.

At first, we thought Crazy Egg was destined for great things, as it generated plenty of interest from the start, particularly with Fortune 1,000 companies. This led us to believe it could sell for $10 million. However, we were unable to find an offer for the asking price. We tried to raise venture capital but had no luck there either. Crazy Egg just wasn’t a lucrative investment at that time. I learned from this experience that it’s important to wait a few years for software to become profitable.

Q: How did you use your experience with Crazy Egg to create KISSmetrics?

A: After Crazy Egg, we wanted to create more tools to solve common problems. We tried everything from marketing budget software to podcast advertising, but nothing came close to Crazy Egg. We wondered what we were doing wrong, and we realized our offerings were too generic. We needed to create a solution that solved a unique problem without demanding too much effort from the end user.

We returned to analytics and created KISSmetrics. This has become more than a single tool — it is now an entire brand, under which we have released several products. There is also the KISSmetrics blog, which I use to continue bringing users advice on content marketing and optimization.

Q: We’ve talked plenty about the past, what about the present? How do you spend most of your time?

A: I’m still very much focused on both Crazy Egg and KISSmetrics, along with my other software. I have also continued public speaking, investing, and advising startups and, of course, I have my blogs. I write eight blog posts a week — it is very important to me to use every hour of the day productively.

It was great talking to you, Neil! Thanks so much for taking the time to answer our questions!